Skip to primary content
Skip to secondary content
There are 11 basic doctrines that seminary students are supposed to know something about by the time they graduate.  For the past couple of years, we’ve been trying to keep track of the scriptures that we come across that relate to these doctrines.  Here are this year’s: (numbers listed alone are in the Doctrine and Covenants)

Yesterday was Ward Conference.  Our Bishop gave a great talk on 6 things to remember that prove that our Heavenly Father loves us.  I didn’t want to lose them so I wrote them down and figured I would put them here so I could have them forever.  Here they are:

That’s a lot of hard work.  I’m so grateful for all of it!

We all got together and carved pumpkins last Friday night.  It was fun.  Liz brought a couple of friends and EmaLee and Brian came with the kids.  All of the adults had a pumpkin to carve – Erek helped me clean out the inside of mine.  I wish that I would have thought to take pictures of us doing all that.

That was Friday night.  Today is Tuesday.  It’s only been a little over 72 hours (maybe like 84) and here’s what they look like already… 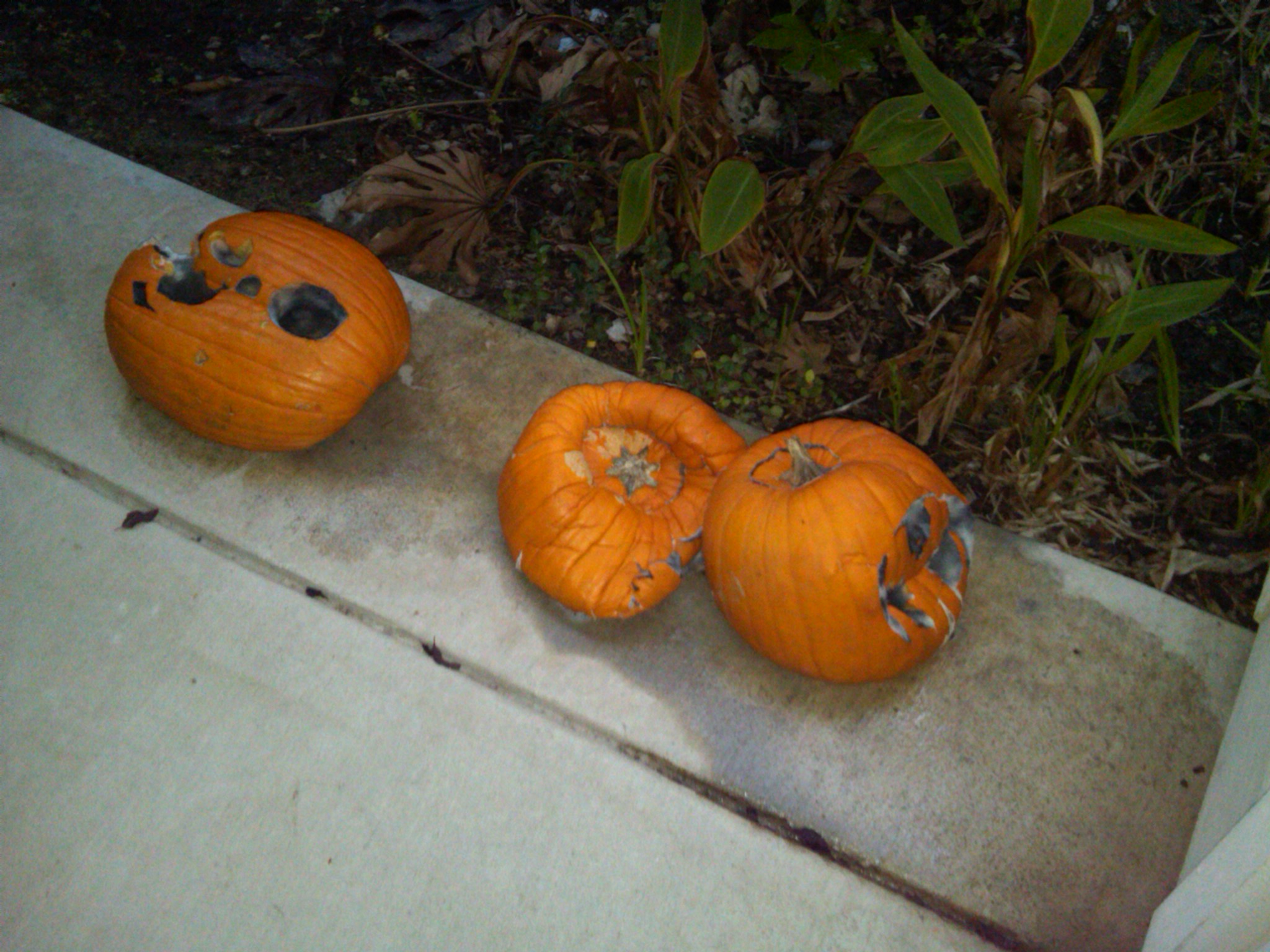 I took my cousins Sydney (16) and Kendyl (11) to Dairy Queen for lunch today and they had the cutest (short) conversation:

Kendyl: Why do they have a mailbox?

Sydney: So they can get mail.

In seminary this morning, we talked about the fruits of the Spirit and I had them create scripture chains for each of the fruit.  I wanted somewhere to keep track of their chains and this seemed like a good spot.

Carmen: Soul is Filled with Joy

Lili: Knowing the Things of God

What a great group of kids!

This happened a couple of weeks ago but I had to stop what I was doing to get this down.  It was killing me…  Another random Friday on the train – this time in the morning…

A mother-daughter duo got on and sat across the aisle from me.  The girl was at least 13 but talked whined like she was 9.  As soon as they got on, she ran to a table seat (I know – already cringing, right?) and said, “Ooooo!  Mommy!  Let’s sit at a table!  I want a table seat!”

Visions of Veruca Salt turning into a blueberry went through my head.

Mom: Ok sweetie, whatever you want.

They sit down.  Pause.

Mom hands daughter a soda and pulls out a newspaper.  It’s 7:30 in the morning.  I didn’t dare look to see what kind.  It’s either full of sugar or caffeine – either way it’s going to ruin someone’s day.  Then, a little later while goin through San Clemente…

D:  Mom!  Look at those houses!  Mom!  Mom!  (Loudly, while smacking the back of the newspaper)

M:  Uh-huh.  Nice.  We should make friends with those kind of people.

Pause, while staring at houses.  Then…

M: Do you want to get your hair trimmed soon, or are you ok?

M:  I know sweetie.  (Patting her hand) That’s what summer is for.

Long pause.  I had to do something so I tried to tune them out.  But then, up around Irvine…

M:  Wow, those things get big.

D:  Yeah, the one I wanted was THIS big.

D: Yes, and it was SOOOOOO cute!

D:  I don’t know, but it must have been expensive because the Chihuahua was one-thousand-three-hundred so it must have been more than that… like twelve hundred!  (a – I didn’t know that they sold dogs by the pound, and b – she’s obviously not paying much attention in math class.)

D:  Yeah, but it was sooooooo cute!

M:  Did they have any sheep dogs or anything?

D:  Oh, I don’t know.  I just wanted the Saint Bernard because it was sooooo cute.

I had to pack up my stuff at this point, but I think it would have been fun to follow them around downtown LA that day(they were going to do some serious shopping).  I wonder if Mom ended up giving Daughter a piggy-back ride back to the train station.  Or, better yet, if they got a Saint Bernard “puppy” to take home.  Daughter has obviously never seen any of the six Beethoven movies.  People constantly seem to amaze me.

You can judge me if you want to, but I DON’T CARE.  That little bit of salsa & cheese & sour cream HANGING OUT in the bottom of my burrito foil after I’m done eating is MINE.  IT’S ALL MINE.  Digging down into those foil crevices is my tongue’s favorite part of the day.  Even better is that every time I eat a Chipotle burrito, the little surprise at the bottom of my foil is different.  I mean, sometimes it’s carnitas the most awesome pork ever, and sometimes it’s chicken or steak…

SO FINE, I guess you can go ahead & call me a “FOIL LICKER” but that foil holds that one, last delicious bite that I couldn’t ever think of throwing away.  It’s like my burrito flavor savings account – but it’s in a bank that won’t ever need a BAILOUT. 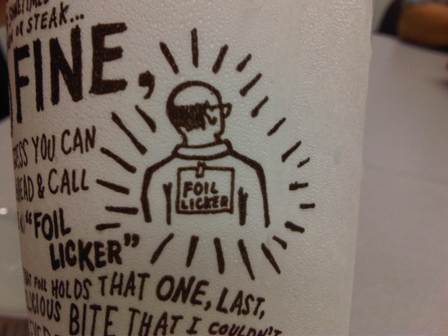 We’ve got some family coming into town this weekend.  They’re not staying very long but have given us a really good excuse to clean up the house and the yard and stuff.  Because Jon went to trek and then to summer camp with the scouts this summer, the yard was kinda let go.  Can’t really blame him – way too many things to do plus a wife that doesn’t do bugs.  He was going to just hire a landscaper/gardener for a day this week to pull weeds and decided yesterday to make the offer to his scouts instead.

So, between 9 and 10 this morning, we had 6 scouts show up to weed our yard.  Three of them worked on the back yard and three in the front yard.  I was sitting at the computer working on our ward newsletter so I could hear what the 3 in the back were talking about.  They were cracking me up!  Here are some pieces of their conversations:

Scout 1: Because you’re the smallest.

Scout 3: What does that have to do with anything?!

Scout 1: You’re also the most athletic.  You could use the work.

(I glanced out the window and didn’t see a fishing pole or line or anything so I’m not sure what they were going to try and do with it.  I saw them all walk over to the pond and then…)

(Jon was coming in the front door and there’s a straight shot out the back window from the front.  They all run back to their spots.  A few minutes later…)

(They started singing rounds!  Not even joking!  It was AWESOME! … About 10 minutes later…)

Scout 2: Hey Scout 3, you should let me pierce your ear with this.  I bet it would work.

Scout 3: Why would I want my ear pierced?

Scout 2: I don’t know, I just think it would be cool to say that you did it yourself.

Scout 3: But if you did it for me then I couldn’t say I did it myself.

Scout 2: What are you doing?

Scout 1: Who wants to sing church songs?!  (And then in his loudest and deepest voice…)  BOOK OF MORMON STORIES THAT MY TEACHER TELLS TO ME…

Scout 1: ARE ABOUT THE LAMANITES IN ANCIENT HISTORY…

Scout 1: LONG AGO THEIR FATHERS CAME FROM FAR ACROSS THE SEA…

All 3: GIVEN THIS LAND, IF THEY LIVE, RIGHTEOUSLY!

Scout 1: No, but the liked Canadian bacon.  It’s just like ham.

Scout 1: I was sitting in wet grass.

Scout 3: *laughing* Your cheeks are blushing!

That all took place in about 3 hours or so.  I wasn’t evesdropping the whole time.  That would just be rude!  🙂

I heard this cute little poem on American Pickers.  They found some old Valentine cards in someone’s barn.

Don’t kiss your lover by the garden gate.

Love is blind, but the neighbor ain’t.

“A rose by any other name would still wither up and die!”